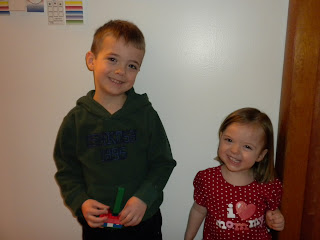 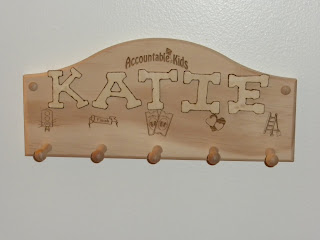 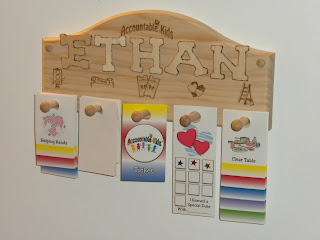 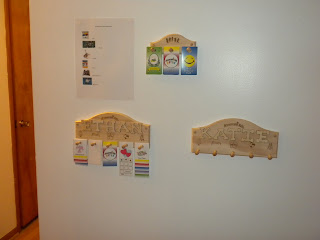 This fall at Family Camp a friend mentioned the "Accountable Kids" program to me and suggested that it might help with our thus-far-flailing attempts to teach Ethan self control and consistent obedience, specifically in our morning routine. I watched the online video and thought, "This is great!" I'm happy to say it was definitely worth it to get the program, though, as I'll explain later on, we're going to have to wait a while to fully implement it.
"Accountable Kids" www.accountablekids.com is a program designed to help teach kids ages 3+ to be accountable for their chores, actions, and daily life. I love how it is specifically designed so that as the child grows and actions become second nature, you move naturally on to self organization and use of day planners and such.
It's a complete discipline system - not to be confused with "punishment" system. It's very good for both parents to review the program and decide together how to implement the program and what chores to start off with, but the beginning basics include morning, afternoon, and evening chores that a child is responsible for doing without the parent "nagging" the child on or doing the chores for him/her - thus the "Accountable" name. For us, that meant the following chores:
Morning (to be done before family worship and breakfast):
Pajamas in laundry basket
Getting dressed
Hair combed (with help)
bed made (with help)
Personal worship (listening to a CD with accompanying book)
Afternoon (to be done before Daddy gets home):
Brush teeth (right after breakfast)
Quiet time
Helping hands (coming to Mommy or Daddy and asking if there's anything he can help with)
Clean up toys
Set the supper table
Evening:
Put pajamas on
Clean up any evening toys
Brush teeth
At the end of each set of chores, the child is to come to a parent and ask for a "ticket", which can be used for specific privileges. In our house, those included playing with Legos, playing with micro machines, his visual art studio, or something else considered special. For each day that the child receives all three possible tickets, he receives a star. After receiving 10 stars he has earned a special "date" with Mom or Dad.
It's good for the parent to walk through with the child all of these steps for the first several days so that the child knows exactly what is expected of him/her. Then as the weeks progress, you add various components such as "extra chores" (chores that are expected, but the child receives compensation for), "Best Behavior cards" (to be given when a parent sees and wants to enforce a specific good behavior - to be done randomly), and "Privilege Passes" (to be given when working on a specific behavior with the child - to be done consistently).
The tickets are also the key component of the behavior system in that they can be taken away as a consequence for negative behavior. This helps the child to realize that in real life our actions and choices affect our privileges and consequences.
Overall we love the program, but like I said before, it's going to have to be in the future. We started out with just the basic components: chores, tickets, and stars. We intended to do this for a week or two and then go on to adding the extra chores and Privilege Pass. The first few days went well, when we were helping him through each step. Then as we gave him the leeway to be more independent we started having the same issues as before we started using the program. We were careful to be as consistent as possible, but things just weren't getting any better. We tried for a month, tweeking things as we thought of them to try and make things go smoother, but he just couldn't/wouldn't do things on his own. Every morning ended up with major frustration and tears, either on my part or Ethan's part. We finally had a breakthrough moment when he spent the night at Grandma's house. Though we know he's physically capable of doing everything on his list, we're not sure he's emotionally ready. Whether it's jealousy of a little sister who still needs everything done for her or just emotional immaturity we're not sure, but we've decided for the next few months we'll go back to doing everything for/with him until he feels more secure and then add the "Accountable Kids" to our routine again in a few months. I'm really looking forward to using it and adding components as he matures and gets older. We love what we've seen and read.
Despite the issues we've had, we have received some benefits. The chore cards have helped ME be more accountable with the morning routine in some of the areas I had previously been weak in, such as brushing hair and getting the kids dressed before breakfast each morning and getting their teeth brushed twice a day. I still have the cards up and am using them.
As for the Accountable Kids program, in reading through the book and the steps given, I definitely would give it a strong 4.5 out of 5 stars. I wish they would give suggestions for use with kids who when tickets are taken away look at you and say, "I still have 2 tickets so I can still do special things," in a gloating manner! So far, when that happened, it meant he lost all his tickets. If it was just a passing comment and kind of a question without the gloating we didn't take them all away.
Accountable Kids, we look forward to using you again soon! We have Katie's ready, too, as soon as she gets old enough!
Posted by Jennifer at 11:15 AM